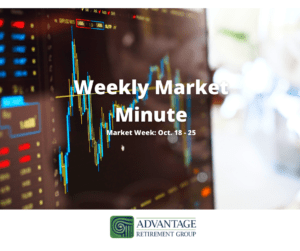 Stimulus remains elusive. Plenty of talk, but no action!

All week, the White House and House Democrats teased us with a potential agreement on a stimulus package. Frankly, the act is getting old. We keep hearing that there’s talk between Treasury Secretary Steven Mnuchin and House Speaker Nancy Pelosi. The market drifted back and forth all week, rising and falling on the hopes of a deal.

I have maintained that additional relief would continue to be politicized by both sides and we would not see a deal before the election. President Donald Trump wants a win before the election, while the Democrats want to win in November. Neither side wants to give away anything that would advantage the other. The Dow Jones Industrial Average has stayed in the 27,000 to 29,000 trading range for the past month, and the optimism that arose with each possible deal seems to be wearing thin. With the election just a week away, any agreement will not impact those it is intended to help. In my view, the potential stimulus is dead until after the election.

In addition, if the election proves contentious, we may not even get to new stimulus until December or later. The other unknown is that Senate Republicans are not on board with a massive spending plan and keep putting forth targeted “skinny” deals meant to help particular sectors, such as airlines, hotels, and small businesses.

Big tech gets called on the carpet

The Justice Department slapped Google with an antitrust lawsuit last week for less than competitive practices with its search engine. After all, Google controls 90% of the search market and the phrase “Google it” has become synonymous with searching the internet. I would say Google is plenty big in the space, and I suspect the company has the resources to mount a vigorous defense.

How will the Google lawsuit affect the company’s stock and the markets? It’s hard to say. The first part will require proof that the company is guilty of antitrust statutes. If guilty, what will the remedy be? Will the company be required to pay fines, break up, or sell assets? The company’s stock (GOOG) was up last week after dipping slightly on Tuesday. Normally, when the government sues your company, investors flee, but this is the tech age and things just are not the same.

Also, a Senate Committee approved subpoenaing the CEOs of Twitter and Facebook in light of the most recent controversy surrounding the suppression on their platforms of New York Post articles critical of Democratic presidential candidate Joe Biden and his family. There is increasing pressure to remove certain exceptions that inoculate these platforms from lawsuits. These firms were immune from lawsuits because they are supposed to be neutral. Still, perceptions by some, plus the companies’ actions during elections, have cast doubts on whether these platforms are truly neutral in allowing everyone to be heard equally.

There was some concern that unemployment claims were beginning to creep back up before we saw a drop last week. Remember how I told you the prior week’s unemployment claims climbed to over 900,000 and we should worry if that trend continued? I also said that number was largely due to the layoffs in the airline industry and at Disney. It would have been very concerning if we continued moving in that direction, indicating that the higher reading was not just a one-time thing. But last week we had a nice movement downward in claims, which unexpectedly dipped below 800,000 while the consensus was calling for numbers in the 870,000 range. Good news for the recovery is always welcomed, but last week the markets hardly noticed.

Earnings continue to be really good, but with all the focus on the stimulus drama, it’s hard for markets to focus on anything resembling fundamentals, such as economic data or earnings. With 10% of the S&P 500 reporting, 86% have reported positive earnings surprises while 82% reported positive revenue surprises. This week, the earnings season will be in full bloom, with the S&P 500’s 800-pound gorilla, Apple, and internet retail behemoth Amazon reporting on Thursday.

While newsworthy, both events had little impact on the markets as the focus remained on the stimulus or lack thereof. Finally, the iPhone 12 went on sale last Friday. It is 5G-capable and starts at $799, but it feels like there’s a lot less hoopla around this launch than prior versions.